Limited new Cabernet from Dave Phinney's new winery The Crane Assembly - limited. previous vintage 95 Points Robert Parker: "The third blend Dave Phinney and winemaker Kevin Fox are turning out is the El Coco Proprietary Blend Composition. The 2014 is 45% old vine Zinfandel, 41% Petite Sirah and 14% Merlot. There are 490 cases for this vintage. It is a spectacular wine, with an opaque purple color and a big, sweet kiss of pen ink, graphite, blackberry, blueberry and violets. Its supple, sweet tannin is amazing, and the wine builds incrementally to reveal terrific viscosity, fruit intensity and extraction, with a savory spiciness. This is a stunner to drink now and over the next 15+ years.... ...The winemaker behind these magnificent wines is Dave Phinney, working from the Dr. George Beldon Crane Vineyard, which was first planted as a site in 1885. At that time it was largely a blend of grapes often referred to as “mixed blacks.” There are now eight acres in production, four containing the original plantings and the rest planted from 1930 onward. Phinney and a group of his friends purchased the vineyard in 2012. These notes reflect what they’re doing to date and serious consumers should be thrilled."   From the new winery The Crane Assembly has quite a back story.  In August of 2012, four friends (Dave Phinney, Darryl Browman, Kevin A. Fox and Bryan D. Sandoli) stood in the middle of a block of hundred year old Zinfandel. The vineyard was planted by George Beldon Crane in the late nineteenth century and is one of the icons of the Napa Valley. Hours earlier they had signed the paperwork to buy the vineyard and it was just in the nick of time...they picked the grapes the next morning.  Since that first year wines were made from our G.B. Crane Vineyard under the el Coco label and the GB Crane label. 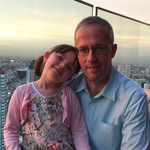 This was really enjoyable. I was disappointed by the ‘13 vintage but this ‘15 is much better. Well balanced, fragrant with good cherry and berry fruit, some spices and light oak. Very smooth finish and higher alcohol is well integrated. Decent wine.

This was really enjoyable. I was disappointed by the ‘13 vintage but this ‘15 is much better. Well balanced, fragrant with good cherry and berry fruit, some spices and light oak. Very smooth finish and higher alcohol is well integrated. Decent wine.