Surh Luchtel Cellars is exemplary of everything we love in small-production Napa Cabernets. They source fruit from the finest vineyards and produce a Cabernet that tastes as good if not better than its peers that cost two or three times as much. Sourced from the famous Beckstoffer Vineyard next to Opus One, the 2008 Surh Luchtel Cabernet Sauvignon Napa Valley is a rock-star of an undiscovered wine. Complex and heady aromas of cassis, currant, vanilla and spice. It is sweet, ripe with cassis, blackcurrant, cedar, tobacco and vanilla flavors which are supported by ripe, well-integrated tannins that lead to a long lingering finish. This wine is a candidate for long-term cellaring of 10-15 years if you can hold out that long as its delicious right now. Only 500 cases produced. Surh Luchtel wines are the result of collaboration between two long time friends Don Surh and Gary Luchtel. First as housemates in college in the Oakland hills in the late 70’s, they became friends over many a bottle and discovered that their wine interests were more than casual and have been making wine together since 1992. 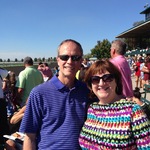