100 Points Parker - limited                                 Limited new release from Schrader Cellars. 100 Points Jeb Dunnuck:  "I think the gem in the lineup (which is splitting hairs as these are all gorgeous wines) is the 2016 Cabernet Sauvignon Beckstoffer To Kalon Vineyard CCS. Tasting like the essence of Napa Valley Cabernet Sauvignon with its incredible cassis, blueberry, graphite, violet and scorched earth aromas and flavors, it hits the palate with full-bodied richness, polished tannin, and a purity of fruit and elegance that’s hard to believe. It’s going to be impossible to resist on release (and if I had a bottle I’d probably open it the day I received it) but will certainly benefit from 3-4 years of bottle age and keep for 25+ years." 98 Points Robert Parker:  "Deep garnet-purple colored, the 2016 Cabernet Sauvignon CCS has exuberant notes of plum preserves, baked blackberries and warm cassis with notions of cedar, pencil lead, Indian spices and Sichuan pepper plus a touch of rose hip tea. Very firm and structured in the full-bodied mouth, the palate is laden with tightly wound black and blue fruit layers, lifted by an exciting line of freshness and finishing on a lingering perfumed note.... The Schraders, working with well-known winemaking consultant Thomas Rivers Brown, continue to farm and produce some of the world’s greatest Cabernet Sauvignons from three fabulous Beckstoffer-owned vineyards: the To Kalon Vineyard in Oakville, the Georges III Vineyard in Rutherford and the Las Piedras Vineyard in St. Helena. To Kalon is gravelly, eluvial, loamy soils; Georges III Vineyard is an old creek bed; and Las Piedras Vineyard in St. Helena is planted on old river rock and gravelly loam. All of these blocks utilized for Schrader’s wines encompass over 25+ acres and are custom-farmed – as Fred Schrader likes to say, essentially “virtual vineyards,” even though they’re not owned by the Schraders. Their initial focus, which has proven so successful, is essentially a microscopic study of different clones planted in different blocks with exactly the same philosophy of viticulture, harvesting, winemaking, élevage and bottling. Production of all the 2012s, which was a slightly more generous and later harvest than 2013 with bigger berries, ranges from 200 cases for the Old Sparky and Georges III, to 520 for the CCS, 420 for the T6, 625 for the RBS, 370 for the Schrader, 620 for the LPV and 100 cases for the newest baby, the Colesworthy, which is a selection of the best barrels of their Las Piedras offering. Some of the other characteristics of these wines are that they all spend about 20 months in barrel, but the percentages of new Darnajou and new Taransaud varied from cuvée to cuvée, although the CCS is 100% new Darnajou, as are the Old Sparky and the Colesworthy. Finished alcohol on the 2012s is in line with other vintages, at 14.4%-14.6%. And in 2013, virtually identical numbers of 14.4%-14.6% were achieved. The consistency and the analytical aspects of the wines is mirrored in the incredible quality that Schrader has produced. 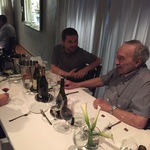