Keenan is a fantastic producer on Napa Valley's Spring Mountain. Neighboring Pride, Paloma, Barnett and Cain, the 20045 One of the highest rated Cabs of the vintage. Rare. 94+ Points Robert Parker:  "The 2009 Cabernet Sauvignon Reserve shares much of the same aromatic flavor profile as the 2010, but it is a bit less tannic and structured. Layers of fruit build to an effortless, huge finish long on texture and pure class. This voluptuous, highly expressive Cabernet Sauvignon is likely to drink well earlier than the 2010, but it also has the pedigree to age gracefully for years. The blend is 95% Cabernet Sauvignon and 5% Cabernet Franc. Anticipated maturity: 2017-2029...As I have written in the past, Michael Keenan has done a fabulous job of ratcheting up the quality of the wines from this Spring Mountain estate. Some of the finest wines of Napa Valley are emerging from Robert Keenan Winery." 94 Points "Cellar Selection" Wine Enthusiast:  "This Cab is built for the cellar. Don’t even think of touching it before 2010, and even then, it will still be tannicly tough. Better after 2012, to let things settle, and should evolve for many years afterward. Buried beneath the astringency is a wealth of blackberry, black currant and cedar flavors, rich, pure and mountain dense." 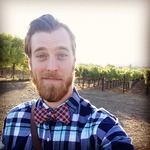 A good Cab Sauv. Chocolate, anise, some dark fruits hanging about. Happy I Coravined the glass I had so I can decant the rest later!

A good Cab Sauv. Chocolate, anise, some dark fruits hanging about. Happy I Coravined the glass I had so I can decant the rest later!