Scott Palazzo makes a small amount of this Bordeaux-style red from Napa Valley that is one of our best discoveries of the year!96+ Points Robert Parker:  The 2010 is another wine of great intensity but coiled, very tight, with high levels of tannin. Sensational in extraction and rchness, this blend of 72% Merlot, 20% Cabernet Franc and the rest Cabernet Sauvignon is the product of a cool year in Napa. It shows fabulous density, richness, and intensity. Perhaps it will evolve somewhat like the brilliant 2005 has, but it is still excruciatingly young, intense, promising, but needs to be forgotten for at least another 4-5 years and drunk over the following two decades. ...Scott Palazzo has a fascinating background, traveling the world, picking fruit in Bordeaux in the late 1970s and early 1980s, becoming highly involved in the music business producing videos that earned him several Grammy nominations. Yet he gave it all up for the lifestyle and challenge of producing world-class wine in Napa Valley. He produces three cuvées of wine, all well-known among wine insiders, but probably not getting the notice among consumers that they merit." Only 1,100 cases produced. 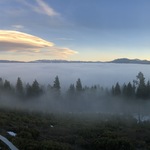 Merlot dominant blend with plenty of Cab Franc which makes it. Great acidity. Medium bodied and balanced. Another 5 years easy.

Merlot dominant blend with plenty of Cab Franc which makes it. Great acidity. Medium bodied and balanced. Another 5 years easy. 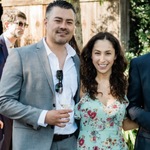 Dryness in the finish!

Dryness in the finish!