95 Points -  New                                Fantastic new discovery from Mount Peak. Zinfandel sourced from Rattlesnake Hill at the top of the legendary Monte Rosso vineyard.                94 Points Robert Parker: "The 2016 Zinfandel Rattlesnake contains 10% Petite Sirah and was aged in new French (41%) and American (7%) oak barrels for 14 months. Medium garnet-purple colored, it leaps forth with baked raspberries, kirsch and blackberry pie notes pus nuances of dusty soil, cinnamon stick, dried roses and oolong tea with a hint of spearmint. Full-bodied, rich and spicy in the mouth, it has a plush texture and fantastic freshness, finishing with a minty lift." The story of Mount Peak Winery begins more than a century ago at the celebrated Monte Rosso Vineyard and culminates with the recent revival of the brand by Gallo. A vestige of one of California's great "ghost" wineries, the wines are a tribute to the extraordinary facility that once stood there. Originally built in 1886, Mount Peak was a marvel of innovation with its three-story, gravity-flow system built from rock directly sourced from the dry-farmed Monte Rosso vineyard. While it ultimately emerged as one of California's top producers, it was closed during Prohibition and left abandoned to the elements, laying silent for decades. Over 130 years later, Gallo has revived the site and the vineyard, perched at nearly 1,300 feet along the spine of the Mayacamas Mountains, straddling the Napa and Sonoma Valleys. The steep hillsides are set against a dramatic backdrop and the new Mount Peak label will focus on Cabernet, Zinfandel, and a red blend from the original Monte Rosso fruit. The Gravity is made from plots within the vineyard as well as fruit sourced from Frei Ranch in Dry Creek Valley and Snows Lake in Lake County. It's 33% Petite Syrah, 29% Cab, 21% Zin, 10% Syrah, 5% Grenache, and 2% Barbera. 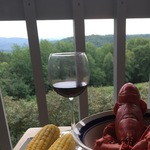