One of the best buys from Spain we've discovered.  Limited. 90 points Robert Parker:  "The Black Slate series wines are produced by different producers from different villages of Priorat for US importer Eric Solomon, as is the case of the 2015 Black Slate Gratallops from Celler Cecilio. They want to show the character of the Priorat grapes in the different villages. It's a blend of Cariñena, Garnacha and Syrah from (guess what?) slate soils that fermented separately with indigenous yeasts and with 20% of the volume being raised in oak barrels for some eight or nine months. I noticed the Syrah here, combined with classical Gratallops sweet Garnacha and a pinch of spices. The palate is medium-bodied, with the fine slate texture, generous, warm and showy, but without excess, with the graphite holding it together. This is a Gratallops Vi de Villa." Based in the village of Gratallops, Celler Cecilio blends Garnacha, Cabernet Sauvignon, Cariñena, and Syrah, primarily from old vines planted to the region's famed llicorella (schist) soils. August Vicent is not only the proprietor Celler Cecilio, the oldest registered estate in Priorat (established in 1942), but he happens to be a neighbor of Daphne Glorian and Eric Solomon in the small village of Gratallops. He makes characterful, lush and exotically-spiced wines from his vineyards in the village and has been persuaded to sell us some for our Black Slate Gratallops. It is a blend of Garnatxa Negra, Carinyena, and Syrah from vines ranging in age from 20 to 65+ years old. Fermented entirely with indigenous yeasts, it is aged in a combination of concrete and French oak barrels 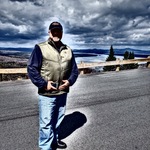 Good description, slate. Flavorful and sustaining. Bet it will be even better in the morning with da eggs.

Good description, slate. Flavorful and sustaining. Bet it will be even better in the morning with da eggs.